Home > Books > Trouble in the Ruins 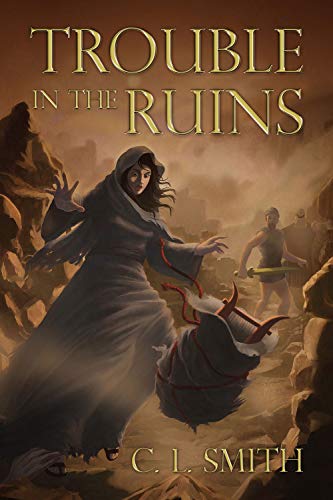 When the massive walls of Jericho collapse at the blaring of ram’s horns, Salmon rushes into the city to rescue Rahab and plunges into undreamed of trouble. But getting her out of the city proves to be easier than helping her integrate into the holy camp of Yahweh. Euphoric over the glorious victory, Joshua makes plans for the next step, a highly significant pilgrimage to Shechem in the heart of Canaan, but trouble and treachery erupt within their own camp. As Israel deals with the devastating ruins of internal deceit, Canaanite kings, priests and Anakim giants jostle for power, united only in their determination to destroy the invaders.

Return to the turbulence of ancient Canaan in Book Three of The Stones of Gilgal. Even the raging floods of the Jordan could not stop the Israelites from crossing the river and setting up camp near Jericho. Canaanite kings and kingdoms—even the Anakim giants—are in turmoil. Former enemies jostle for power in new alliances, united only in their determination to destroy the Israelite invaders.

When the massive fortifications of Jericho collapse, Salmon rushes into the ruins to save Rahab, the beautiful harlot who had rescued him and his fellow spy from certain death. But saving her from her own city is not so easy. And that is only the beginning of the trouble, treachery and devastating ruins they and their friends face as they settle into their new life in the Promised Land.

C. L. Smith, retired junior high school English and history teacher, former missionary, and life-time Bible student, has been captivating audiences around the world for years with the timeless thrill of biblical tales. For the past 25 years the author has been weaving her lifetime love of learning and people into the fabric of obscure ancient texts from the books of Numbers, Joshua, and Judges. She calls the resulting tapestry of rich scenes, colorful characters, and exciting episodes The STONES OF GILGAL saga, an inspirational six-part series of biblical novels set in the time of Joshua.

Other Books in "The Stones of Gilgal"

A River to Cross
Look Inside