Who do you write for?

I used to think I did, but I was wrong.

I went through five stages during the first five years I was writing. I’m going to be brutally honest and tell you what they are in the hope that you can learn from my experience.

Before moving on, let me clarify something. None of the stages are wrong. I learned something from each of them. The danger I see is remaining in one of the first four stages too long.

Stage 1: Writing for myself.

I wrote five historical romances in my first two years of writing. The first one I wrote for myself—the story of my heart. Those 250,000 words gushed out. I’m talking spring runoff bouncing over the rapids.

Benefits: The process was exhilarating. I had a blast. I completed a story.

Potential Pitfalls: I wrote what I wanted with no clue as to whether or not the story would be marketable. I learned at my very first pitch sessions two years later it wasn’t when the agent and editor both got “you’ve got to be kidding” looks on their faces when I told them my idea. That manuscript is buried in the recesses of my hard drive. 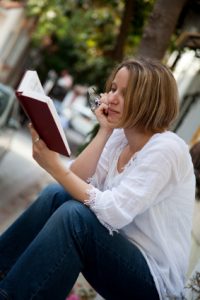 Stage 2: Writing for my contest judges.

After completing the first two manuscripts, I joined Romance Writers of America® and discovered writing contests. I saw them as a way to get feedback on my writing, so I entered some. (OK, there are those who would say that 36 is more than some, but you get the point.) Being an obedient oldest child, I quickly learned what contest judges were looking for, and I did my best to produce stories with those qualities.

Benefits: I learned heaps from my contest judges. Their generosity, kindness, and honesty helped me immensely. And I experienced the thrill of my first finals.

Potential Pitfalls: We writers can focus so much attention on polishing the opening of a story that the rest of it doesn’t get the same attention and, therefore, doesn’t live up to the beginning. We can drive ourselves nuts trying to follow all the “rules.” In addition, we can become addicted to contests and the high a final brings.

Stage 3: Writing for my characters.

I’d completed five stories when I learned that not a single one of them was marketable. I rewrote one of them, but I made a mistake. I let my characters take charge. They “talked to me,” and I listened. I wasn’t in charge of the story. They were.

Benefits: I got to know my characters intimately, and I really liked them.

Potential Pitfalls: At a subconscious level I used my “go where the characters lead” (aka pantser) style to excuse my lack of a compelling plot. By not exerting my authority and accepting my responsibility as the author, I ended up with a lackluster story that meandered. Sadly, I had a clueless, whiny heroine and a too-perfect hero. Because I was overly attached to my characters, I was blind to their weaknesses—or lack thereof.

Stage 4: Writing for the publishing professionals.

Despite the fact that the story had some flaws, my writing had improved technically. I entered some contests and ended up with an offer of representation. My excitement was tempered by reality, however, when I received my agent’s revision notes and learned that I had to rewrite the final three-quarters of the story. I set out to deliver a marketable story with all the necessary elements.

Potential Pitfalls: This is hard to admit, but I lost some of the joy at this point. Writing became more work and less fun. Once I had my contract, I experienced a debilitating case of Second Book Syndrome. I suffered a loss of confidence in my ability to produce a good story.

Stage 5: Writing for the reader.

I pushed through what my agent refers to as Sophomore Book Paralysis by writing. I plopped my backside in the chair and wrote even though I didn’t feel inspired. As I did, a wonderful transformation took place. I stopped writing for myself, contest judges, my characters, or even the publishing pros and began writing for the reader.

What can I do to make this scene more interesting for the reader?
What would make a delicious surprise for the reader at this point?
How can I increase the tension so the reader experiences a delightful rush?

Benefits: Writing, while still work, became fun once again. I picture the enjoyment the story will bring the reader and the resulting satisfaction that will bring me as its creator.

Potential Pitfalls: Inability to pull myself away from the computer to fix dinner, do laundry, or clean house because I’m having too much fun writing stories I hope will keep a reader from wanting to do the same because she’s enjoying the read.

Have you experienced any of these stages?
What have you learned from the stages you’ve been through?
Which stages have brought you the most enjoyment?

Novelist Keli Gwyn is a California native who lives in the Gold Rush-era town of Placerville in the Sierra Foothills. Her stories transport readers to the 1800s, where she brings historic towns to life, peoples them with colorful characters, and adds a hint of humor. She enjoys visiting her fictional worlds, the Coach outlet store, and Taco Bell.

Keli’s debut novel, A Bride Opens Shop in El Dorado, California, will be released by Barbour Publishing in July. She’s a member of the El Dorado Hills Inspire group.

Learn more about Keli by visiting her blog. You can connect with her on Facebook, Goodreads, and Twitter.